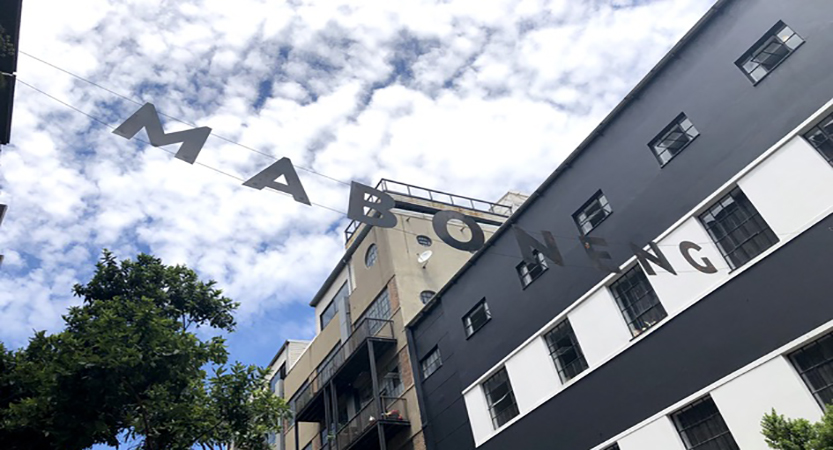 Maboneng Precinct, touted as the coolest neighbourhood in Johannesburg, is nestled in the city’s eastern central business district. The cafe’s, nightlife and bar scene are up and thriving, people bussing in from all around the city to the “place of light” to enjoy their last day of the weekend.

But, paying close attention to the vendors lining Fox Street, the precinct’s main artery, there aren’t as many as there used to be. The foot traffic is also markedly reduced. Glancing at in the Arts on Main building that houses Market on Main, the star of Maboneng on weekends for those looking for more than just revelry, it’s quiet.

Asking the waiter at Home of the Bean (HOB) he passes me my cortado where the Market went, he tells me that it’s been closed. For some time now. A lot of industries were dealt a death-blow when lockdowns were instituted across the world to slow down the spread of the Covid-19 virus. Market on Main, a place where people come together to share, wasn’t spared.

The market was moved to Jewel City in late 2020 but vendors (and people) just didn’t come. It wasn’t just that locals weren’t going out. Market on Main drew in a lot of foreign visitors and their foreign coins. Now that international travel is at a slow drip, things aren’t recovering quick enough.

One of Fox Street’s regular weekend vendors, Xola Mthombeni, is dependent on international tourism to sell his wares and the pull of Market on Main. Mthombeni has been selling his Basquiat-esque artwork and tie dye t-shirts here for the past four years and business was good. “Tourists and some locals come but a lot of the time it’s tourists,” he said. “Now, because of the Covid, it’s challenging.” Despite the lifting of strict regulations, Mthombeni hasn’t noticed any difference. “It’s still the same as during lockdown.”

What Mthombeni misses about the international crowd and their disposable income is that they are usually the people that buy art, and specifically his artwork. An abstract painter that explores Africa in his work, it’s non-Africans that gravitate towards his artwork and take a piece home. “Because this was a tourist attraction, we used to do our artwork based on [what] tourists [want] – conceptualising in Africa. ’Cause Africa fascinates them, and they come to Africa and find Africa, it’s like I’m giving them what they’re looking for,” Mthombeni explained.

He’s found that South Africans, because, in a way, they’re living what he’s portraying, aren’t that interested in it. As Mthombeni said: “Locals, they can relate – it’s just nice [to them] – but tourists, they buy.”

Mthombeni, and all the other artists selling their artwork with him, keep coming to Fox Street, despite the closure of Market on Main, because it’s free for them to display their art. “For now we keep it here because we don’t pay,” he said. And they keep coming back here out of not just hope but also because this place inspires them.

There’s also a sense of camaraderie between not just the artists that Mthombeni is sitting with but the vendors as well. It’s almost like a sense of community has formed around the shared experience of going through something traumatic and surviving.