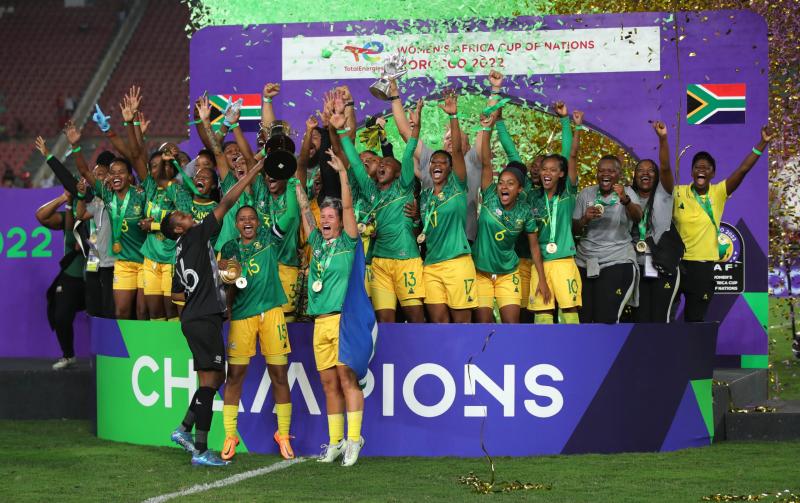 The President of South Africa, Cyril Ramaphosa has called for the end of unequal pay between man and woman in sports in order for the principle of the country’s constitution to be fulfilled.

The President was speaking during the official welcoming of Banyana Banyana where masses gathered to celebrate their big win of the Women’s Africa Cup of Nation (WAFCON) title at the Prince Moulay Abdellah Stadium on Saturday.

The Imbokodos under the leadership of Coach Desiree Ellis, made history when they beat tournament hosts Morrocco 2-1. The win took place after the coach won Confederation of African Football (CAF Women’s Coach of the Year) last week Thursday, putting the nation on the global map and ushering the champion queens well to August’ Women’s month coming in just five days.

For years, women in sports have been earning ten times less than men and the president hugely opposes such notion.

“I heard that when Bafana Bafana play, they get 10 times the salary you get when you play and i am totally against that. We are a non-racial, democratic and non-sexist country hence for the longest while I have been very strong in arguing that unequal pay is unfair, unjust and that it must come to an end. We need to give added remuneration to these young women who have made our country so proud.” President Ramaphosa said.

The Deputy Minister of Sports, Arts & Culture, Nocawe Mafu said Banyana’s win was evidence that women are up to the task the same as men.

“Banyana-Banyana has done it for all the women in the world, proving that we are as equally capable as men.” said the Deputy Minister.

The team’s winger, Linda Motlhalo’s ‘lipstick in the sports field’ trend also confirms that women can look good and still take up a man’s job.