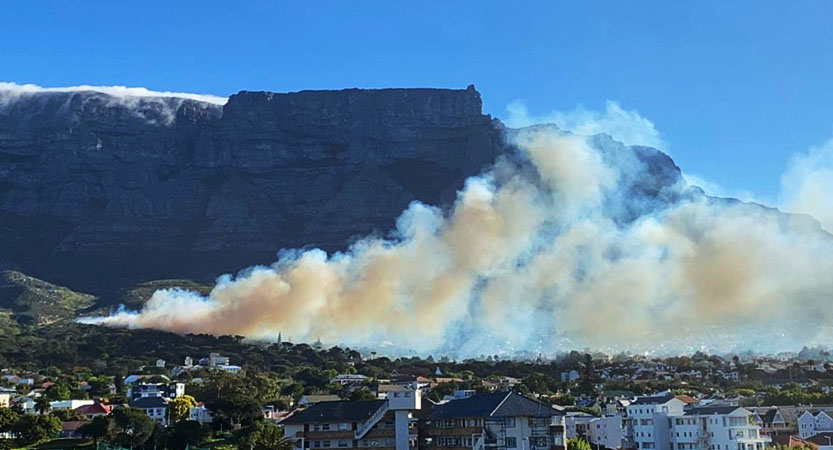 South African National Parks will be conducting prescribed burns below Tafelberg Road on the mid-slopes of Table Mountain and in Lower Tokai during March/April 2022. These prescribed ecological burns are planned to occur during the natural summer to autumn fire season in fynbos. Park neighbours near the burn site have been informed about the burn. The burns are scheduled for the latest part of the fire season when conditions are most favourable for conducting prescribed burning. The actual dates of the burns cannot be predicted in advance as prescribed burns are only conducted when temperature, wind and humidity conditions are suitable for fire control. An announcement will be made on TMNP’s Facebook page on the day of each burn. Residents, who live nearby, are advised to keep their windows closed and washing inside on burn days to minimise smoke discomfort.

Fynbos relies on fires every 10 – 15 years. If fynbos doesn’t burn often enough, proteas and other bushes get too old and their reproductive ability declines substantially, but if fynbos burns too often, reseeding shrubs can be lost and resprouting species and alien species can take over. Prescribed burning is conducted under suitable weather conditions and at appropriate time intervals to encourage reproduction and growth in fynbos species and prevent the build-up of fuel loads. While a number of fuel reduction burns have been conducted in the area, this will be the first prescribed burn in the selected block in Lower Tokai.

Following a fire, reseeding fynbos species release their seeds, and seeds from ericas, restios, proteas, daisies, and other fynbos species are more likely to germinate after they have been exposed to smoke. Conducting the prescribed burns just before the rainy season starts enables veld regeneration, as the seeds being released will experience cooler conditions and receive rainfall over the months that follow.

In Lower Tokai, the Cape Flats Sand Fynbos is a critically endangered veld type, and many of the plants that occur in this veld type are found nowhere else on earth. Threatened species in this area include Erica turgida (Macdonald heath), Babiana villosula (Autumn bobbejaantjie), Diastella proteoides (Flats silkypuff), Oxalis minuta (Mini sorrel), Lachnaea capitata (Lanky Stringbark) and Protea scolymocephala (Thistle sugarbush). At Tafelberg road, there is old vegetation below the cable station that has not burned in recent fires. Due to the young surrounding vegetation, it is opportune to burn this old vegetation to stimulate regeneration of fynbos and for tourism infrastructure safety.

Fire plays a critical role in maintaining the diversity for which the park secured its status as an integral component of the Cape Floral Region Protected Areas World Heritage Site. Fire is not only a management tool for sustaining the rich diversity of the Fynbos biome by returning nutrients to the soil, stimulating regeneration and opening up space for seedlings and bulbs to thrive, timely prescribed burns also reduce the risks that wildfires pose to property and human lives especially on the wildland-urban interface.