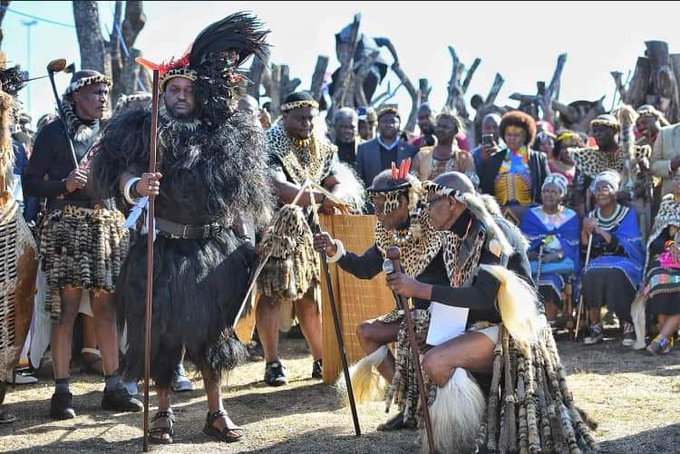 Many people as far as eSwatini gathered at KwaKhangelamankengane Royal Palace in KwaZulu-Natal’s Nongoma to witness the coronation of His Magesty Misizulu Sinqobile Hlomesakhishlangu kaZwelithini, the reigning King of the Zulu nation over the weekend.

King Misizulu Zulu is the third oldest surviving son of King Goodwill Zwelithini kaBhekuzulu and the first for his Great Wife, Queen Mantfombi Dlamini. He became heir presumptive after the death of his father in 2021 and was officially appointed as the next king, however, his Coronation did not take place until now.

The newly elected KZN Premier, Nomusa Dube-Nqube in her address congratulated the King his new role.

“We stand here to congratulate His Majesty King MisuZulu on the fulfilment of this ancient and holy ceremony of Ukungena Esibayeni, a practice etched in the annals of our royal history as a key connection between the present, the past and the future, and a communion with the cosmos of our universe.”

The coronation comes after a long winding battle between factions within the Zulu Royal family over who is supposed to succeed the late King Goodwill Zwelithini who ruled for 50 years.

King Misuzulu’s great-great-great-great-grandfather, King Mpande, as a half-brother of the Zulu King Shaka, reigned from 1840 to 1872. Shaka’s policies and conquests transformed a small clan into one of South Africa’s most influential pre-colonial powers, extending over much of what is how KwaZulu-Natal.

The Nguni-speaking clan of the southern Bantus, which evolved into the Zulu people, takes its name from the third of its recorded chiefs. Malandela, believed to have reigned in the early part of the sixteenth century, is the patrilineal ancestor of the present king, whose lineage comes down from him through Chief Senzangakhona to the latter’s son, Shaka.

His Majesty Misizulu, according to Premier Dube-Nqube, has now entered an important circle in the life of the Zulu nation where, he too is reconnecting to the long line of such great ancestors whose blood, sweat and tears formed what is now the nation of South Africa.

“Today the spirits of our ancestors engulf this land of Jama, Senzangakhona, Mpande, Cetshwayo, Mkabayi and the heroes of our liberation struggle like Inkosi Albert Luthuli, Nelson Mandela, the royalt y and people who walked before us and opened the way so we could stand here today.”

The KZN province is in its economic recovery and rebuilding stages following last year’s July unrest and the floods that took the lives of many, the damage of infrastructure and the loss jof jobs

According to Premier Dube-Nqube, rebuilding requires a collective effort of all stakeholders, further reassuring the critical role played by the institution of traditional leadership in the lives of the people of KwaZulu-Natal and the country.

“In line with the Constitution provincial government has duly institutionalised the support that we grant to the Royal Household and traditional leadership in general. Working together with national government, we are rebuilding our province.” she said.

“It is important that in the process we do everything towards restoring the dignity and centrality of traditional leadership to serve our communities better, and to instil and use government programmes to engender a sense of self-empowerment among our communities.” the Premier said.