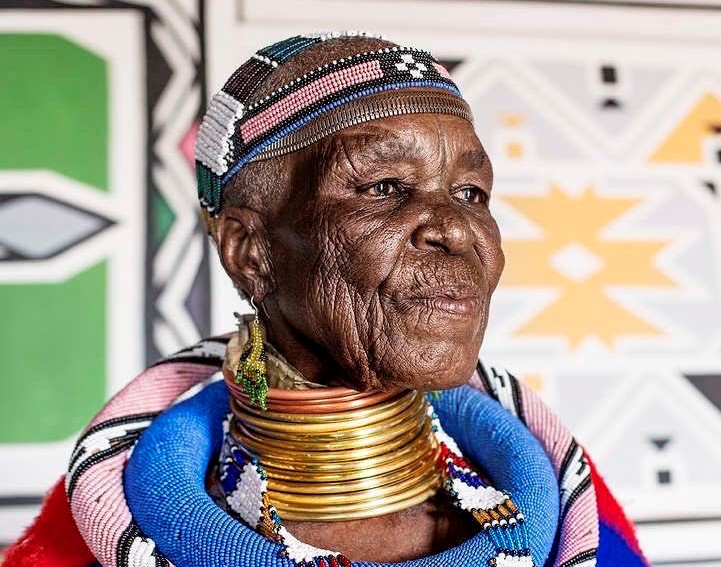 Mpumalanga Premier urges Esther Mahlangu robbers to hand themselves in

The internationally acclaimed Ndebele artist Dr Esther Mahlangu is recovering well after she was attacked in her home  where she lives alone at Siyabuswa in Mpumalanga on Monday afternoon. She was punched, cable tied and robbed of her firearm and an undisclosed amount of cash.

Mahlangu is a renowned known for bold large-scale contemporary paintings that reflects her indigenous Ndebele heritage. She was conferred with an honorary doctorate by the University of Johannesburg in 2018.

She is also well-known for painting her geometric patterns on a BMW 525i in 1991, becoming the twelfth artist and first woman to take part in the BMW Art Car Project, and following in the footsteps of artists such as Andy Warhol.

The attack did not sit well with Premier Mtshweni-Tshipane, who paid the 87 year legend a visit and to show moral support, accompanied by the Department of Arts, culture and recreation as well as the Mpumalanga Tourism and Parks Agency.

During the visit, Mpumalanga Premier advised for the people who robbed Mahlangu to hand themselves over to the police. She condemned the behavior that transpired and is calling it out as a barbaric act.

“We would like to appeal to that perpetrator to go out there voluntarily and submit himself to the police because we are very close to his footsteps and will sure make an arrest. Gogo Mahlangu is an old and fragile woman who does not deserve to be dehumanized in this manner, therefore we say the suspect must do the right thing and go and submit himself for the sake of the Mpumalanga community and for the people of Aba-Ndebele.”

“ We have spoken to the station commander responsible for Siyabuswa to do patrols every day, just to ensure that Gogo Mahlangu is safe within her vicinity as we know that she is a national icon for all of us” said the Premier

Her neighbour, Nakabini Masango, was among the first people to respond to Mahlangu’s cries for help.

“I was at home with my children. I later asked them to go and check up on Mahlangu as we usually do because she stays alone. After they had left, I heard Mahlangu screaming for help.mAs I stepped out of the house, my daughter Hlobisile returned screaming that Mahlangu was bleeding.

“I ran to Mahlangu and found her injured. She was bleeding on her face.”Mahlangu was scantily dressed. A cloth used to gag her mouth was on her neck. She was crying, narrating how her attacker bound her hands with a cellphone charger and repeatedly beat her up,” Masango said.