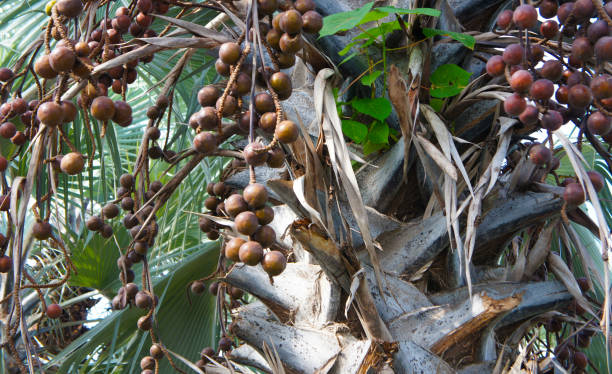 The collection of the Lala seeds is taking place in and around Shingwedzi Rest Camp at Ndindani, a village near Phalaborwa Gate outside Giyani where seed collectors were visible from tourists and harvesting areas were demarcated for planting by beneficiaries who are crafters and weavers in the area between Thursday and Friday this week.

The collection kicked off as a greening initiative meant to support the development of community projects addressing negative environmental impacts in and around the Park.

KNP engages with community structures such as People and Parks and community forums in order to build capacity and assist local communities to come up with ideas, develop and implement sustainable greening projects in their communities.

Spokesperson at KNP, Isaac Phaahla said that the Lala palm seed initiative was aimed at addressing vulnerable natural resources such as over-harvesting of plant species, wetland management and land degradation.

“In 2013, KNP identified crafters at Ndindani, who could produce ornaments from these plants in a sustainable way. The village’s traditional leadership offered crafters a portion of land to grow the Lala palm and other species. The land earmarked for this is in the total of 25 hectare. This initiative is in line with the sustainable utilisation of resources procedure as crafted by the National Department of Forestry, Fisheries and Environment; explained KNP’s spokesperson.

Some of the local crafters have been selling their  wide range products to tourists at entrance gates such as Paul Kruger, Numbi, Crocodile Bridge, Phalaborwa and Orpen; serving as permanent symbols of the market place provided by the Park.

The crown-heart of the lala palm tree fruit is also eaten as a vegetable, the pulp being ginger-like and rather tasty. To get the pulp from the fruit’s tough exocarp it is beaten with a stick. The lala palm is further exploited as a wine source, and thereby many are killed.