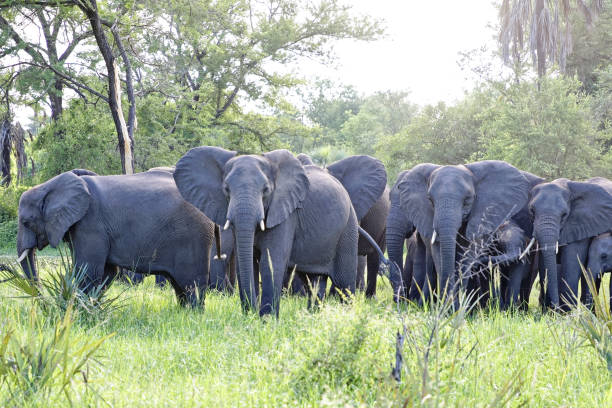 Five of the eleven strayed elephants relocated back to Mozambique

Five of the eleven elephants that were roaming the Madadeni area in the Nkomazi region of Mpumalanga over the weekend have been found, safely captured and relocated to back to Mozambique.

A team of experts deployed by  the Mpumalanga Tourism and Parks Agency (MTPA) in partnership with the South African Natioanal Parks (SANParks ),have been working tirelessly  to apprehend  them after they had entered South Africa from Eswatini, having moved from Mozambique.

The operation was conducted in a safe and secure manner under the authority of the MTPA to ensure that the elephants were captured in a safe manner and were not a threat to human life.

The acting Chief Executive officer, of MTPA, Vusi Vilakazi said that the elephants were released in the Shingwedzi Section North of the Kruger National Park, an operation that was successfully conducted with the assistance of SANParks Veterinary Wildlife Services (Game Capture) operations team and Ranger Services.

According to Vilakazi, this saw the provision of their Fixed Wing and Helicopter for Air Wing Support, Game Capture trucks, Loading Ramps, and all the other necessary resources required to ensure a safe and successful Game Capture operation.

“We are grateful for the assistance received from the SANParks management and the KNP Ranger Services. The collaboration between the two conservation authorities made this operation a success. We are delighted that the elephants are safe and have been captured and relocated safely.”

“Our Wildlife Management team will continue to monitor the situation on the ground and look out for the remaining elephants which it is believed to be with the breeding herds”, said Mduduzi Vilakazi, Acting CEO of the MTPA.