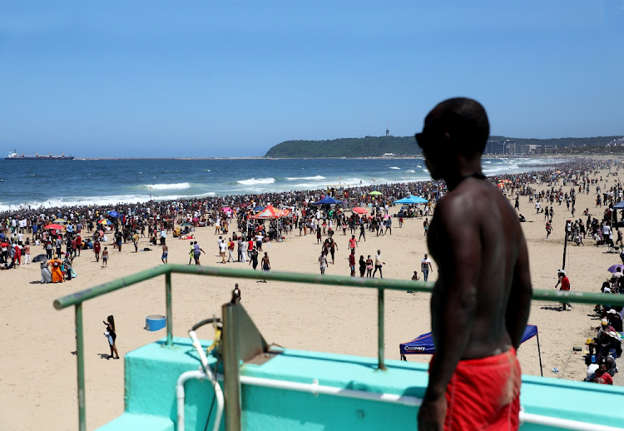 Mayor of eThekwini Municipality, Mxolisi Kaunda recently set an example when he jumped into the uMhlanga beach in Durban when he took a plunge into the water, in order to assure tourists that all system is in place following the closure of many beach sides in the province.
In recent months, eThekwini beaches have shown high levels of E. coli, which has resulted in the city closing some key beaches. As of 1 November, the Westbrook, Bronze, Laguna, Thekwini Beach, uMhlanga, uMdloti and uMgababa beaches remain closed.
The most recent effects of the contamination came to light in two successive incidents in August this year, at Isipingo beach and Blue Laguna, the two popular fishing spots found along the east coast.
About seventy percent of the sewage pumps have reportedly been restored after being destroyed in the April floods.
“Indeed we are open for business, our visitors must come as our water is clean to swim in because we constantly monitor its quality and we guarantee that they are safe. The uMhlanga pump station has now been commissioned but there was a challenge with the main hole and our teams however are working hard in the meantime to take out sand in there.
“We are also certain that as we have now operationalized our pump stations, we now have to re-join the pipes which were destroyed during the floods and once we do that, everything will be back to normal.” the Mayor said.
According to Mayor Kaunda, the city is awaiting a sum of R1.5 million from the national and provincial government to further reconstruct and rehabilitate the state of the beaches in the province.
“Ocean is our Durban mine and without ocean, tourism in eThekwini might as well be dead so it is important that we diversify our tourism packages so that the destinations that are in rural areas , townships and the CBD, hence we have announced more festivals that are coming this festive season.” said Mayor Kaunda.