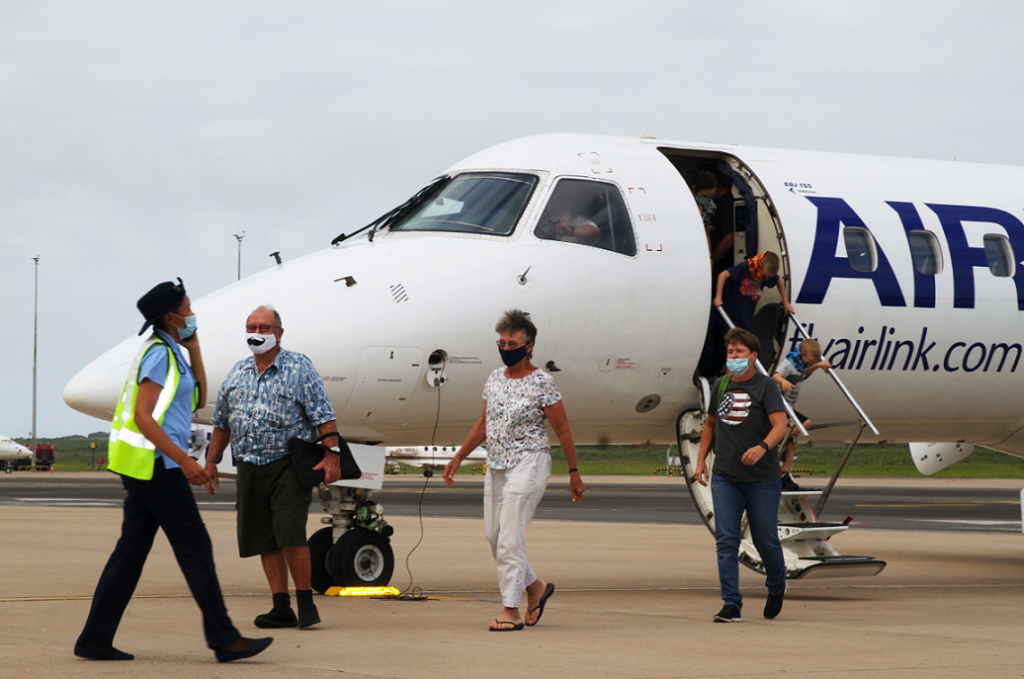 Grace Mushaninga, a passenger on the flight to Harare said she was thrilled to use Airlink to travel to Durban. She is one of the first users of the flight between Harare, Zimbabwe, and at King Shaka International Airport in Durban.

This brand-new Durban-Harare route that links the two cities will be Airlink’s third direct service to Zimbabwe’s capital, along with flights from Johannesburg and Cape Town operating three times a week on Tuesdays, Thursdays and Sundays.

“The service was of excellent quality, and I am happy that there is a Durban-direct route as many Zimbabweans will be using the airline.”

“I am from Zimbabwe but work for a funeral service company in Durban so I will be travelling quite often to the city. I will surely be using Airlink in the future.” expressed the traveler.

This is because Southern Africa recently launched its premier Airline on earlier this week. Durban Direct, the KZN Route Development Committee, arranged a fitting water canon salute as the plane touched down with a full load of passengers.

KwaZulu-Natal will see a massive boost in tourism and this new route will open more doors not only in Zimbabwe, but also to the Southern African Development Community (SADC) region which will help grow investment and tourist numbers from the network.

There will be significant gains for the province especially now that Zimbabwe and the SADC network will go a long way in driving trade and investment relationships into KZN. Having non-stop flights on the route means greater convenience and options for travellers who want to save time and avoid connecting in Johannesburg.

This marks a signal to the world, especially to regional and international bleisure travellers, that there is easy accessibility into KZN and that KZN is definitely fully open for travel, given the fact that Qatar Airlines, South African Airways, Emirates and now Turkish Airlines are back on the Durban direct route.

To the KwaZulu-Natal’s MEC for Economic Development, Tourism and Environmental Affairs, Ravi Pillay, this new route will significantly improve both leisure and business travel, which in turn will greatly assist our tourism sector’s recovery from the devastation of the COVID-19 health emergency and the associated restrictions under which it has had to labour for so long.

“Importantly, too, the air route opens the doors to the prospect of an altogether new era of air-based trade between Durban and its borders and Harare,” he said.

Zimbabwe is one of South Africa’s key trading partners and according to the Organisation for Economic Co-operation and Development, South Africa’s exports, year-on-year to November 2021, increased by 10,6% from R3,5 billion to R3,87 billion, while imports increased by an impressive 85,8% from R156 million to R290 million. While it is true to say that most of this trade comprises road freight, air freight is also currently moved through OR Tambo and Cape Town International Airports.

“We believe that our new service will promote commerce and tourism between the cities, as well as KZN and Zimbabwe. Non-stop flights are popular because they are more convenient and save time for travellers,” he said.