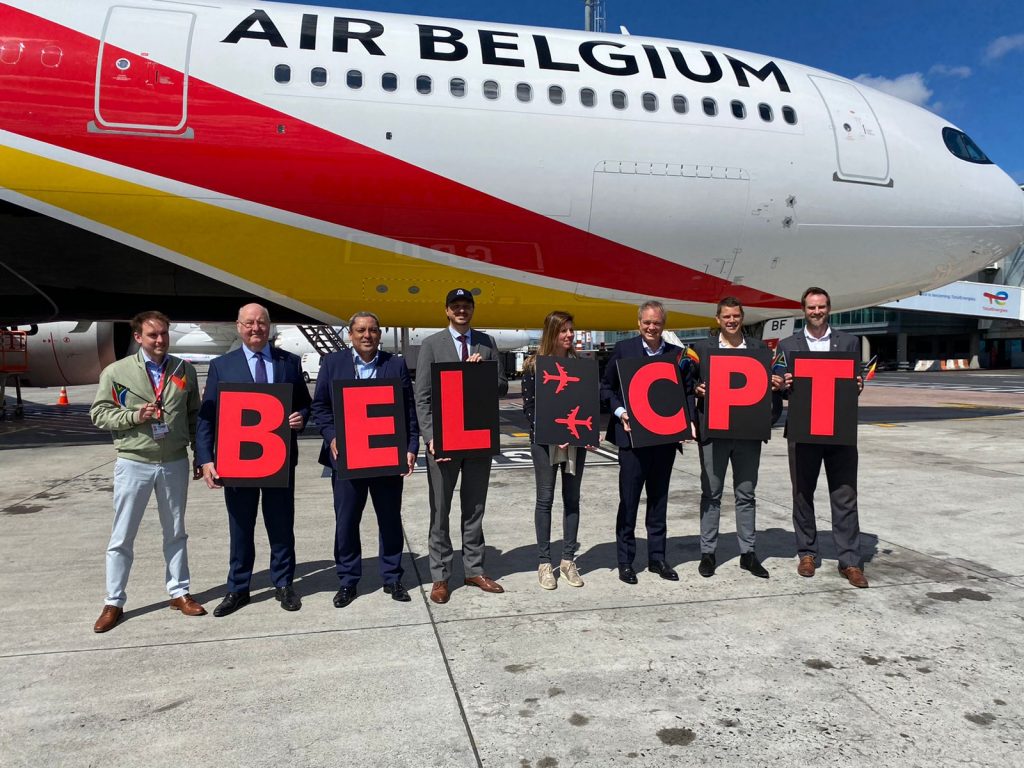 Air Belgium’s inaugural flight from Brussels touched down at 11:00am at the Cape Town International Airport on Monday, marking the beginning of the airline’s seasonal flights to South Africa.

The new route will be operated by the Airbus A330neo with a 286 seats capacity in a three-class layout including 30 comfortable lie-flat business class, 21 premium-class, and 235 economy-class seats. The flight consumes on average 25% less fuel compared to previous generation aircraft, making it more cost-effective and environmentally friendly.

A cheery crowd comprising of Wesgro’s Cape Town Air Access, the Western Cape government & the City of Cape Town, as well as representatives from ACSA and Air Belgium, welcomed the inauguration where the leisure-oriented Belgian airline will operate two tag flights to Cape Town via Johannesburg from Brussels per week.

In 2021, Belgium was the Western Cape’s 7th largest European export market and South Africa’s 10th largest trading partner in terms of the rand value of exports. in this comeback, the route is expected service will add over 1 500 tonnes of cargo capacity in the first season.

Regional General Manager at Cape Town International Airport, Mark Maclean said that the aim was in ensuring that passengers experience a reliable, world class service when they visit the province.

“We welcome Air Belgium and passengers to our airport at the start of what promises to be a bumper summer season and we look forward to the increased cargo potential offered by this route” Maclean said.

In 2021, Belgium was the Western Cape’s 7th largest European export market and South Africa’s 10th largest trading partner in terms of the rand value of exports. With the Johannesburg and Cape Town routes currently being the airline’s only continental Africa flights, Brussels has historically been Cape Town’s second largest unserved market and the largest unserved European market based on two-way international passenger volumes. The additional capacity is expected to offer remarkable potential for growth in business and leisure travel between these destinations for international visitors and locals alike.

The City’s Mayoral Committee Member for Economic Growth, Alderman James Vos, said the unique project brings together private partners for a collaborative effort to take the city of Cape Town and the province to the world. Vos further said that Air Access demonstrated the power of partnerships, enhancing Cape Town’s connectivity to other hubs across the globe while improving the city’s competitiveness while leading to more trade, investment and economic growth.

“Through Air Access, we are connecting Cape Town International Airport with more and more key source markets. And this is why this City government proudly funds this programme.”

“During my engagements with Air Belgium and the Consul-General of Belgium we discussed the many benefits of this route between our two regions when it comes to travel and trade opportunities. Improved connectivity in air cargo and travellers enhances the level of productivity, opens up new markets, boosts exports and increases tourism.” Vos said.

Wesgro CEO and the Official Spokesperson for Cape Town Air Access, Wrenelle Stander acknowledged that Brussels that having a direct connection would add value for business and tourism. “We wish Air Belgium all the best with this new route and look forward to building increased tourism and trade relations between our two destinations.” she said.